A historical account of our city flower, Bauhinia x blakeana

The Bauhinia × blakeana Dunn was first chosen as the City Flower of Hong Kong in 1965. The species was later on selected to be the regional emblem of the Hong Kong Special Administrative Region on 1 July 1997 when Hong Kong returned to the Chinese sovereignty. Bauhinia × blakeana has been widely cultivated in parks, gardens as well as roadside amenity areas in Hong Kong and other parts of the world. Its interesting leaf form and showy flowers throughout the winter months make this handsome tree well known to most of our citizens. However, not many of us would know its history and how it was discovered in this world.

This species was first mentioned in the Report on the Botanical and Afforestion Department for the Year 1903. The report described, “The mysterious origin of the tree and its magnificent flowers at once arrest the interest. A tree of it was discovered between 20 and 30 years ago in the woods on Mount Davis from which it was introduced by its finder into the gardens of the Pokfulum Sanatorium and from there to the Botanic Gardens. So far, all efforts to identify them with any foreign species have failed”.

Specimens had subsequently been compared in the Kew in Britain and other herbaria, but without the discovery of any similar plant elsewhere. Until 1908, the then Superintendent of the Botanical and Afforestion Department, Mr. S. T. Dunn described the tree in Latin and formally published it as a new species in the Journal of Botany. Mr. Dunn added in the article that, “It is indeed to the Fathers of the above Mission (Missions Etrangeres at Pokfulam) that we owe the preservation of the Bauhinia. It was discovered by them near the ruins of a house on the sea-shore; from the trees thus produced the Botanic Gardens were supplied.” The species Bauhinia × blakeana was named after Sir Henry and Lady Blake to commemorate the kind interest taken in the Botanic Gardens by them. Sir Henry Blake was the Governor of Hong Kong from 1898 to 1903.

Bauhinia × blakeana was propagated by cutting, grafting or air-layering. All the individuals we see today are probably the direct descendants of the one first cultivated in Botanic Gardens. 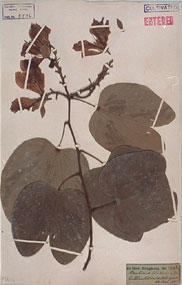 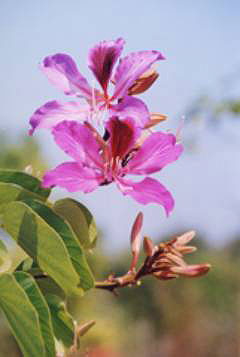 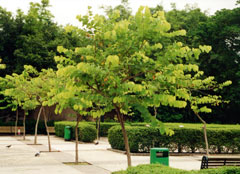